Selfried and the Secrets: A Novel 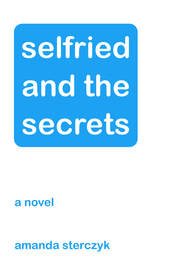 “My name is Linda Schlumpsky and I’m a social media influencer, but you’ve probably never heard of me." Thus begins the story of Selfried, a self-made millionaire who dominates social media. But all is not what it seems. She has a secret—several, actually—and the world is about to discover what’s really behind the curtain.
Excerpt: The Trainer
Please enjoy this excerpt from my upcoming first novel, Selfried and the Secrets.
(copyright 2019 Amanda Sterczyk, all rights reserved)
​
"Drew looked down at his untied shoelace, visibly frowning, frustrated that it had once again loosened up. It was time to replace the shoes, not just the laces, but finances were tight and food still placed higher on the list. Every week, he made a top ten list, his own life hack to distract him from the stressors of the day, a list of how to spend his meagre earnings that rarely even made it past the top two or three entries. Being a personal trainer in a small town was hard enough, add to it the depressed local economy and the inherent racism of his neighbours, all combining into the perfect storm that meant business was slow, slower than usual for his liking. He tried to stretch his meagre earnings further, buying day old bread, opting for the price-reduced section at the local grocer, choosing to walk when he could no longer afford to replace parts on his decades’ old beater car.
His parents couldn’t help him out financially, struggling as they were too, with both bills and the shame of Drew’s life. While no one ever mentioned it publicly, everyone in town was aware that he lacked a familial resemblance to his father, Drew had heard the whispered comments behind raised hands in high school, chose to ignore the furtive looks as he passed by. Instead, he found solace in the school’s gym, choosing to spend his lunch hours lifting weights and avoiding conversation.
When he wasn’t at the gym or doing schoolwork, Drew read online articles about weightlifting, learning new techniques and exercises from posted videos. Upon graduation, it just made sense to register for the online exam and make it official. He did, after all, know more about strength training than anyone else in a hundred-mile radius. And it saved his parents the torturous guilt about not being able to afford post-secondary education.
He regularly sought solace in the gym, choosing to lift weights when life was pushing his shoulders towards the ground, swapping the burden of his thoughts with a legitimate load he could feel with his hands, lovingly caressing the plates as he slid them on the barbell. Lifting heavy reset his brain, reset his attitude to what mattered. You couldn’t dwell on problems when a forty-five pound barbell, laden with over one hundred pounds of additional heft demanded your undivided attention.
Drew’s solitary existence troubled his mother, who wished more than anything for the joyful sounds of grandchildren, but she kept her desires to herself, not wanting to burden her son, a man whose troubles seemed etched into his face, leading to his being mistaken for a man a decade older than his twenty-two years."